This mount is named after Mohammed Emin asha 1840 to 1892 who also became a governor of the Equitoria province in Sudan in 1878 and explored the central African region widely. It got out of the way with the rebel forces after an 1883 revolt, which was rescued by Sir Henry Morton Stanley in 1888 but also declined to return to Egypt. After that year, he was again caught in a second revolt, was imprisoned and then released. On the other trip into the Central Africa in 1892, he was murdered in what is called Democratic Republic of Congo. 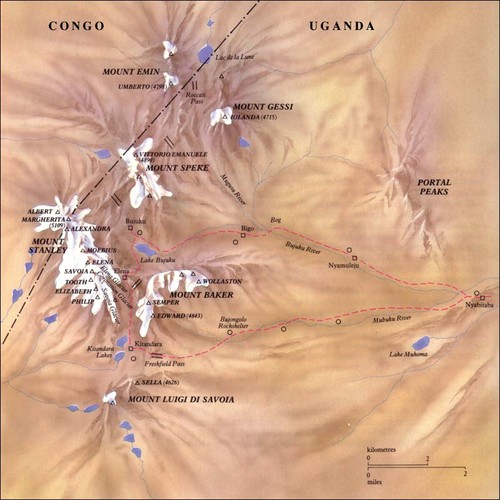 This peak is also the fourth highest Massif within the range and like the Gessi which is composed of two summits that are connected by a very narrow ridge. The southern peak called Umberto is also higher and was climbed first by The Duke of Abruzzi J Petigax and C. Ollier on June 28, 1906 by the southwest Ridge. There have also been many climbs of the peak that are recorded by this route. The normal route that is never climbed is to rise up the Mugusu valley to Roccati pass and then turn west into the DRC and climb steep slopes and the thick groundsel towards the locality of the pass between the two main peaks. From here, you turn left and work around a smaller peak on the ledges to the East, and eventually gain the ridge as you follow the summit. There is a steep drop that might need a rappel and then the additional pitches of the 5th class climbing along the narrow ridge. There is also a major summit called the Kraeelin peak, at 4791m that can be climbed by hiking a gully that leads to north- west direction from near the col between the two main peaks and arrive the summit from the south in a fairly short order. Mt Gessi has no glaciers on the massif.